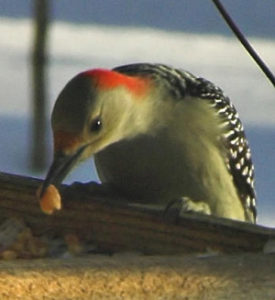 This photo of a Red-bellied Woodpecker was taken by Mike Pidwerbecki at his feeder on Line 10 Oro-Medonte.

Red-bellied Woodpeckers were once a very rare bird in Simcoe County. They are not mentioned in Devitt’s “The Birds of Simcoe County, Ontario” (1967) or were they recorded for Simcoe County during the first Ontario Breeding Bird Atlas of 1981-1985. The Orillia Christmas Bird Count has two previous count week records (1996, 2002). To the great excitement of all, 2 birds were found in the Xmas Bird Count of 2006, both in the south end of the count circle. This woodpecker was once primarily restricted to the Carolinian Forest Region of Ontario but has steadily been expanding its range northwards in recent years. (Margo Holt) 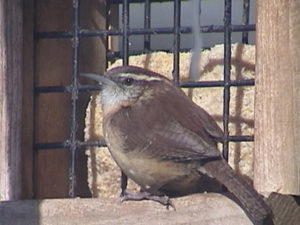 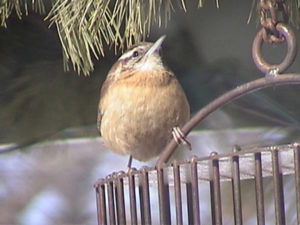 A Carolina Wren dropped by my place ( Nancy Ironside, Bay St., Orillia, Lake Couchiching) on October 25/06. Paul and Joan Leeson ( Maple Drive,
Orillia, Lake Couchiching) have had a Carolina Wren feeding every year for 3 winters now, even coming into the house on several occasions , possibly through the garage. It has been recorded on 2 Orillia Xmas Bird Counts: 2001, and 2004. It was first recorded in the County in June, 1939 and there are records of a wintering Carolina Wren in 1956-1957 and in 1960 ( south of Orillia). About 30 years ago Chris Harris found a nest, in a shed, in the southern part of the county. This is a southern species that may be extending its range northward in Ontario.