(gallery below – click arrow on right to view more photos)

Dr Kirk Zufelt of Sault Ste Marie, was visiting his father, Dr Bill Zufelt in Orillia on Nov 1. ( seen again Nov 4rth by Bill). Of course, they headed for the dump, where they found a first year California Gull, probably never identified before in Simcoe County. If you wish to look for it, these features will help you with the identification. Photos and descriptions supplied by Kirk, thanks. 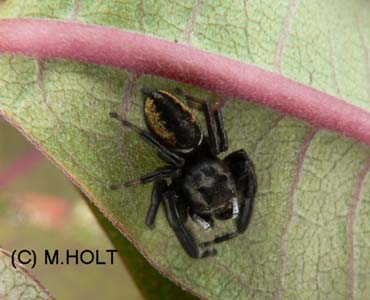 This is a jumping spider of the family Salticidae. Jumping spiders hunt in the daytime. They locate their prey visually, and then run toward it, but then they slow down and stalk their prey to within striking distance. A rush of blood to the rear legs enables them to leap several times their body length.

Photos and information submitted to the web page by Margo Holt 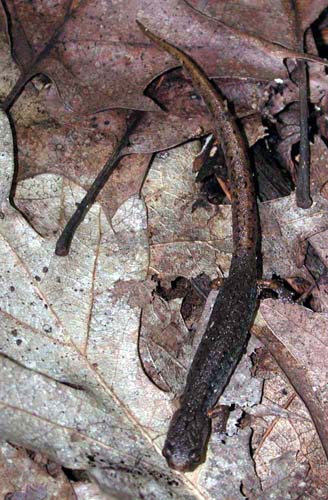 This salamander. one of our smallest, (6-8 cm)( cf oak leaf beside it), was found on Sept 10/08, in northern Severn Township -“The Land Between. “It has a white belly dotted with black spots. Unfortunately it refused to stay on its back to be photographed. It was found in a rich woodland, near a dried up ephemeral pool, associated with Sphagnum moss.

The males court females in the fall, and leave a sperm packet in front of the female. She picks this packet up in her cloaca, and retains it there, through hibernation, until April, when she looks for a suitable pond, where she can lay the eggs at the edge, above the waterline. The female stays with the eggs, maybe for 40 days. 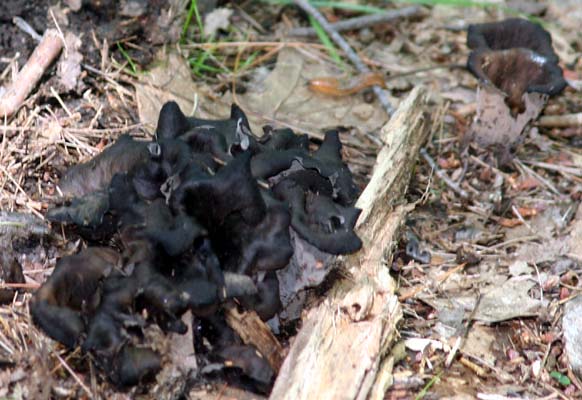 What a wonderful mushroom year we are having. Anyone who has been in the woods this August cannot fail to notice the great fungal fruitings,
with their interesting shapes and colours. While most people have bemoaned the wet summer, the mycophiles have been secretly thrilled
-their season has started early. This is the best year since 1993 for Black Trumpets, (in the Chanterelle group). They are one of the best edibles, with a lovely fruity odour, especially en masse in a bag. And there are no poisonous lookalikes. One Simcoe county picker collected, in one day, enough to make $200, when she sold them to local restaurants. (Of course, she has a solid reputation). This tiny baby eastern massasauga was the first rattlesnake found in a new project by the Couchiching Conservancy and Parks Canada to survey reptile species at risk in our area. The Trent Severn Waterway is really rich in
species diversity in all forms of wild animals and plants, and reptiles are no exception! There are several reptile species here however that are at risk, and their whereabouts in the area are poorly known, so Steve Marks and Brenan Ackert were hired to find these rarer animals.

This little guy was found not far from the Conservancy’s Roehl Reserve property, and is only about 20 cm long, and is pictured next to a nickel for scale! He was probably born last August.

Photo and description by Steve Marks

Last summer, for the first time since 1977, a pair of Piping Plovers successfully nested in Ontario. Surprisingly, this summer there are four pairs of this endangered species nesting in the province. The Piping Plover pair that nested at Sauble Beach last year returned, two additional pairs settled at Wasaga Beach Provincial Park, and there is a pair at Oliphant Beach. All four nests are “protected” from predators with exclosures, and are monitored by volunteers. Beach users are asked to stay outside of the fenced areas that surround the nests. Members of the Orillia Naturalists’ Club have visited Wasaga Beach, including Margo Holt, Leonore Wianko, and Nancy Ironside , and were delighted by the little balls of sand, that would suddenly start running around and peeping.

However,a terrible, freak storm hit Wasaga Beach at 5:30pm, on June 22. Ten minutes of lightening, heavy rain and heavy large (quarter sized) hail. The beach was blanketed in hail. In places it was 6 inches deep. All 3 chicks from the first brood (nest A) perished. (One chick was predated by a Merlin on Saturday.) Although nest B sustained damage, 2 chicks have survived, so far. Updates are regularly posted on the Simcoe Nature Board.

First two photos by Enrique Photo Art. Third and fourth photos by Margo Holt. The photo on the right includes members of a Wasaga Beach Probus Club who have bicycled out to see the little birds. Among the common, relatively uninteresting, white and yellow butterflies that fly among us, is the beautiful Olympia Marble (Euchloe Olympus). It is named for its marbled wing pattern. Since it flies mid May to early June, it is not recorded in the 1st of July butterfly counts, so its abundance is not being tracked. While it is local and uncommon (although common where found), it lives in most of our dry barren areas –alvars, granite barrens, sandy areas. It is chalky white on the upperside, but has greenish-yellow marbling on the underside of the hindwing. The caterpillars feed on Rock cress and other plants of the Mustard family. Its range is mainly in the Midwestern U.S. but ranges into Canada in the southern prairies (Alberta to Manitoba), and also from north of Lake Huron to western Quebec. We find it in most of our areas, especially north of Orillia. 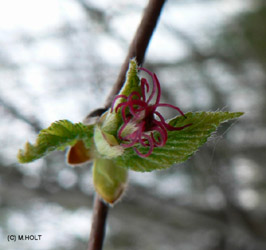 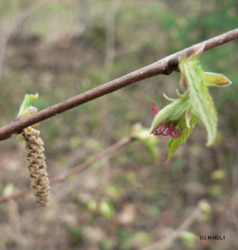 The diminutive flowers of Beaked Hazel (Corylus cornuta) are worth looking for in the early spring. These flowers were photographed at Matchedash Bay on April 25, 2008. Red, thread-like stigmas emerge from the female flower, while the male flower is a pendulous, pollen producing catkin.

This native shrub is 1-3 metres tall, & is found in moist woods & thickets. It ranges from British Columbia to Newfoundland. Some species are valued for their edible nuts (hazelnuts, filberts).

FOR APRIL 2008 Ducks in Flooded Fields of West St.N.

The flooded fields of West St North ( Burnside Line) have a short window of opportunity for seeing migrating ducks. If you go too early the fields are snow covered ( and the road may be flooded, and impassable) or too late and the ducks have gone. April 11 was an excellent date for birdwatchers this year. The flooded fields were covered with ducks. As the morning progresses the ducks move further back, away from the passing cars. About 75% of the ducks were Ring-necked Ducks, along with Mallards , Buffleheads, and Wood Ducks (which are dependable in the wooded swamps near the fields). Ring-necked Ducks, a bird of the boreal region, favour shallow marshes, fens and bogs, feeding primarily on aquatic invertebrates and emergent vegetation. 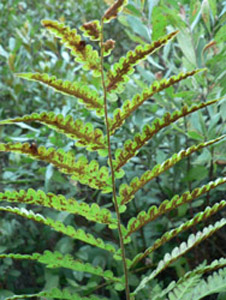 This deciduous fern is easy to recognize in the fall before the leaves drop, because of the chain-like rows of sori (spore sacs) along the midrib of the leaflets, shown in this photo, on the left, taken by Margo Holt. The leaves grow in close masses from creeping rhizomes, compared with the  Cinnamon Fern, which may grow in similar habitats, but grows from clusters from individual crowns. 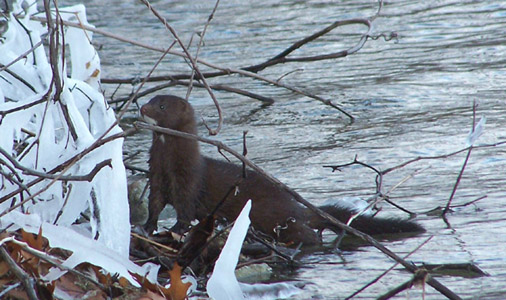 Mink live in Orillia, near Couchiching Beach Park. During in the summer, almost daily, we watched a family of 5 moving along the waterfront. The photo on the left was taken by Caroline Vardy in November. The white patch visible on the neck is a distinctly unique pattern for mink -could be used to identify the particular individual, but we rarely saw them well enough or long enough for this to be useful. Tracks were found in the same area on the snow on the Lake in January – so they are over wintering here.
Studies have shown that females used only 2 dens each, during winter, but males may use many dens. Density depends on the availability of dens and food. On land, mink hunt mainly small rodents & rabbits. Underwater, mink capture mostly fish, crayfish, salamanders, & muskrat. 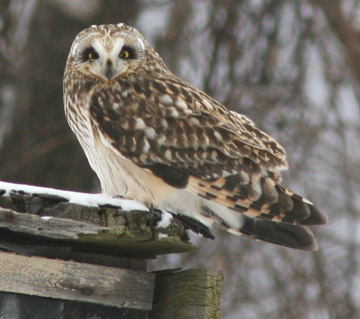 photo by Bob Bowles, map from the Breeding Bird Study

On Xmas morning, Bob Bowles was notified by his friend Brad Whittacker, of Ramara Township, that there was an owl in a field in front of his farmhouse. Bob identified and photographed this beautiful owl. It was seen again on Boxing Day by Larry Durkee, but has not been reported since.
This owl is a rare spring and fall transient, but there are no summer  records. The map on the left shows its usual breeding range. The owls fly low over fields and marshes at dawn and dusk.

From 1907 to 1957 there were 5 specimens taken in the County, and 5 sight records ( including one at Collingwood on Dec 30, 1951). Although individuals birders have kept records since then, no compilation of bird sightings for the County has been done.