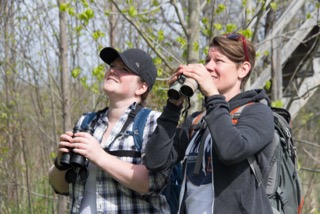 Arni Stinnissen led a walk looking for spring migrants near Matchedash Bay on the Cowan Trail. 16 members of the club had a very enjoyable hike with terrific weather and an early start at Cowan Trail. It seems as though the delayed spring also affected our numbers as well with only 27 species seen and heard compared to 40 last year.

Nonetheless it was a beautiful morning to be out and a highlight was finding a recent dragonfly hatch as well as observing the turtles of the wetland enjoying the warm sunshine.

The normally pesky biting insects were also no-shows and we were able to enjoy our lunch in the pavilion to end the morning.

Thanks to Arni, a very competent and patient leader, and to his wife Dianne who took these photos and kept the records.

Bill Sherwood photographed these Baskettails during the walk. He reports that ” there were there were a dozen or so dragonflies on the ground or on “vertical” twigs trying to dry off/wiggle free and begin their days in the sun”.