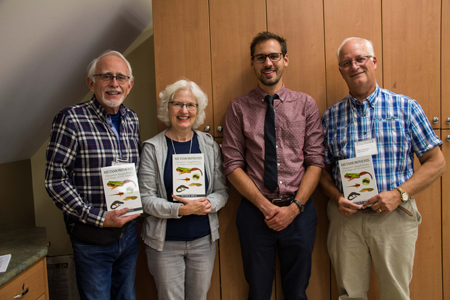 Peter was born and raised in Barrie, and has worked professionally as a naturalist in Algonquin Park over the past 9 years. He has a Biology degree from Trent University. Because of his close connection to Algonquin Park, the presentation began with a look at the beautiful scenery there. It is the essence of Canada.

The Park is very busy now, with the spectacular fall colours. More people visit Algonquin Park between Labour Day and Thanksgiving than all the rest of the year combined. Peter is interested in all things natural, but his true love is amphibians. Amphibians are made up of Salamanders and Frogs and Toads. Salamanders have a tail and four legs, and do not jump. They do not sing. Frogs and Toads, which are better known, jump, have no tail, and sing to find each other.

There are many really good field guides to reptiles and amphibians, but all present guides show only the adults. But how do you recognize the other stages in the life cycle, which might be encountered? Better information was needed for field identification, which would show the circle of life from the jelly-like eggs, to the tadpole, to the adult and the transitions between.

To get this information, Peter had to do basic studies, and probably reared about 10000 tadpoles, for example, which he photographed at different stages of development (especially different tails, – as they got older and older the tails got smaller and smaller). We saw videos of Peter collecting in the field, using a dip net and wearing rubber boots. Then the tadpoles had to be fed, while he had them in captivity. Frogs and toads are herbivores and easy – boiled spinach seemed to be his favourite food for them.

Salamanders are more difficult since they are carnivores, and he had to feed them small creatures, such as mosquito or midge lava. Every few days they were released back into the wild, and maybe caught again a week later. However he did come to recognize field markings that could be used for identification of the young, and this he illustrated in the book using digital painting, highlighting the important features, that would not be obvious in a photograph.

As a result of this effort he has produced a field guide, which was for sale at the meeting, featuring the new information, not in any other published book. It was a lively presentation, illustrated with photos and interspersed videos. He ended with a video, taken through a microscope, of a larva in the transparent egg, moving its leg and tail at times. Truly exciting, like an ultrasound of a baby in the uterus.