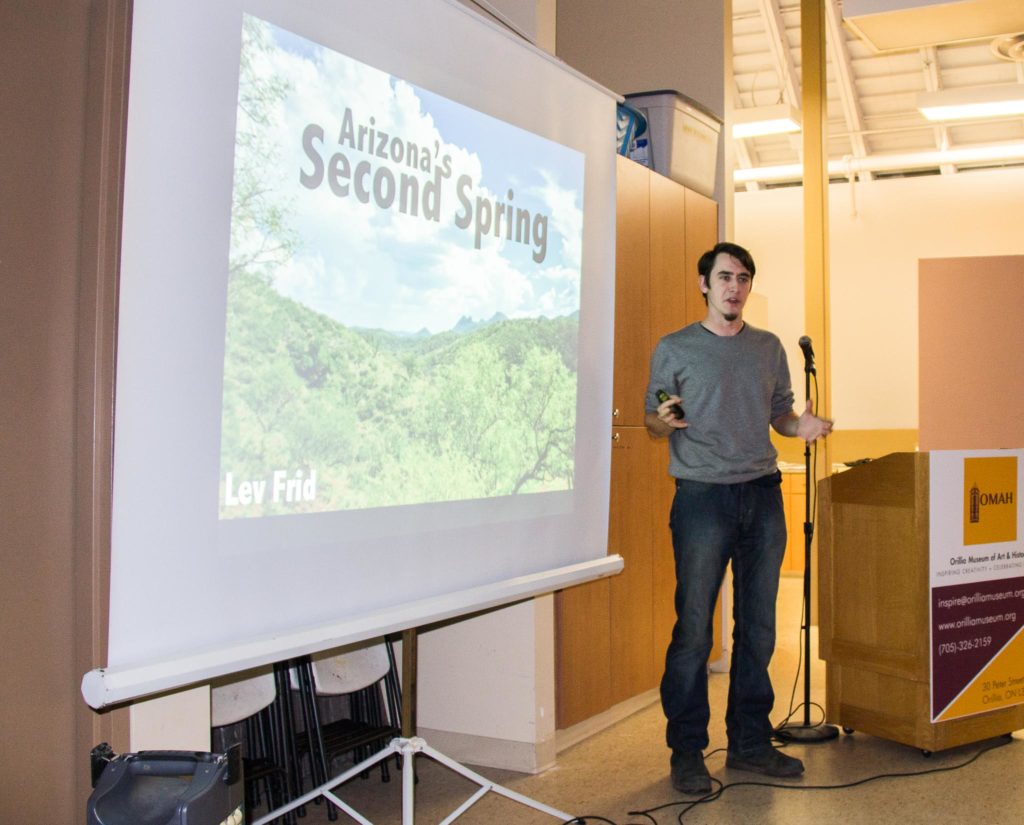 On Nov. 2, 2016, the Orillia Naturalists’ Club regular monthly program featured Lev Frid, a young Russian-born (but Canadian raised) naturalist, who is extensively traveled, especially through the Americas. Lev has worked every summer for 8 years for the MNR as a park naturalist at Algonquin Provincial Park, and is also an excellent photographer. He has a fascinating Facebook page featuring his findings, but for this evening his topic was the monsoon season in Arizona, which occurs during the summer months.

Arizona is basically a desert, but there are small oases of ecosystems that exist in some remnant mountains, rising in isolated fashion from the desert floor – called Sky Islands. It was to this environment, and the surrounding Mexico/Arizona border area, that Lev and his friend Amanda travelled this August (2016) .The photographs followed their journey, up and down the sky islands, and to the desert floor. The North American monsoon occurs between mid-July and mid-August. This transforms some of the desert between these Sky Islands into lush green valleys. It is still summer on the desert floor – very hot, at higher elevations, the temperature is more tolerable for we humans.

As there are many eco-systems in close proximity to each other, so too there are many difference species of birds, reptiles, amphibians, and insects:. and plenty of birdsong . Camping provided opportunities for sightings – for example the Great Plains Toad, and whiskered screech owl. A madrone tree, which produced its berries thanks to the monsoon, attracted Elegant Trogons – and their babies. Butterflies, such as Nabokov’s Satyr and Marine blues, were seen in Madera Canyon. Near a wash, (vegetation lush post monsoon),a Red Rock Skimmer (dragonfly) was spotted.

An incredibly camouflaged Canyon Treefrog was photographed. Even a small black bear was sighted feeding on madrone berries. On to California Gulch, where the driving was a little hair-raising without a 4 wheel drive. However, the sightings included Western Red-bellied Tiger Beetles, varied buntings (which begin breeding only in the monsoon), buff collared nightjars, Western Black Widow (spider). Other birds included the five striped sparrow, and a golden eagle. At a small seep were found the Desert Checkered-Skipper, the Elf butterfly (from Mexico), and the Filigree Skimmer.(dragonfly).

At a lower elevation, near Sycamore Creek, the Serpent Ringtail dragonflies were seen (a species that appears and disappears with the monsoon rains). In a rock pile was found the Banded Rock Rattlesnake and a little further on the way, a Black-tailed Rattlesnake. North of Phoenix, our travellers encountered a heavy monsoon rain, following which emerged Burrowing Wolf Spiders, one with babies, Merriam’s Kangaroo Rats, a White-throated wood rat (being predated by a Western Diamondback Rattlesnake). Also seen in the area Pocket Mice, Bark Scorpions. Atop a saguaro was a Gilded Flicker, in the campground, Clark’s Grebes and Western Grebes were at one of the Salt River reservoirs.

Mount Ord (higher elevation) yielded sightings of the Gray Vireo and Black-chinned Sparrow, as well as interesting butterflies. They also saw a Sonoran Whipsnake. Returning to lower elevation, under a bridge, they found a colony of Mexican Free-tailed Bats, as well as a pair of Harris’s Hawks nearby, and a Great Horned Owl (all probably hoping for bat-meal). At the ebbing water wash, they saw the Greater Earless Lizard, and a dying Barn Owl (likely starving). These are a few of the sightings – presented in wonderful photos – which can be viewed online by checking out Lev’s facebook page.

Arni Stinnissen thanked Lev for his presentation, and he and Amanda are invited to take part in the Christmas Bird Count.