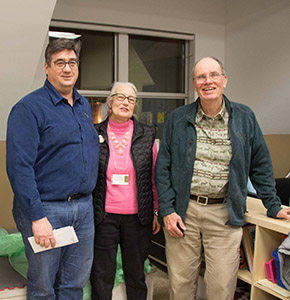 Ron Tozer, an icon of Ontario’s birding community, and an excellent speaker, was at our monthly meeting. He was Park Naturalist for 25 years in Algonquin Park, beginning full time in 1972. An avid birder, he has been keeping records of the arrivals, nesting and departures of all 280 currently known bird species in the Park for decades. His book, Birds of Algonquin Park, was published by The Friends of Algonquin Park in 2012.

He spoke of Birds in the Park prior to 1950. He compared them to current sightings, and discussed why the changes occurred. Historically the Europeans came to Canada in search of big white pine, needed for the British navy in their battles with Napoleon. The logging men followed the Ottawa River and eventually ended up in what is now Algonquin Park, in the 1830’s. The lumber business changed the habitat dramatically. They built camps to live in in the winter. They squared the best part of the tree for shipping to England as a raw product, so a lot of slash was left in the bush, which encouraged wild fires.

Later, sparks from the railway, a corridor through the Park until 1959, caused even more wildfires. In comparison, there have been relatively few wildfires today, and the areas burned each year are smaller. The loggers needed water for floating the pines to the mills on the Ottawa River, so many dams were built, resulting in higher lake levels and flooded sedge meadows in the Park. They brought food in for the loggers and horses in the fall, and later communities sprang up near sawmills in the Park. They could grow potatoes and oats in the poor ground so fields were cleared for Depot farms.

As a result of these activities there was a variety of habitats. Now a lot of these areas are reforested, with less habitat diversity, and less bird diversity. So, in 1893, when Algonquin Park was designated as a protected area, it was not a primeval forest, as some think. However, there were no settlers there to displace and complain, because of the poor land. The government had no plans to stop logging. (There still is logging, but no clear cutting.)

Prior to 1950 bird records are scanty. Optics were poor, and if they had trouble with identification, they shot the bird (which resulted in a good collection of stuffed birds).There was a Survey conducted in 1900, which included good records of birds, some park staff kept sightings, some canoeists kept records, and some Park Lodge visitors were knowledgeable and left records. Some of these records were preserved, even in personal family archives. Ron has collected these records and the talk was based on these observations.

The House Wren was reported as “ all over the place”, now totally gone.  The House Sparrow, was considered a “pesky bird”, first reported in 1912, but disappeared as a breeder in 1973. Bobolinks no longer breed in the Park. These birds lost their open habitat, buildings, horses and people with food waste, since the communities associated with logging are all gone, and the Depot farms are growing in. In 1915 canoeists complained that Whippoorwills kept them awake at night.

Another reported in 1922 that Chimney Swifts were even nesting on open walls of buildings, and that Barn Swallows were abundant. Some of these birds have lost their habitat, but their decline may be part of an overall decline in aerial Insectivores. The bird life in Algonquin Park has changed, partly due to habitat change, and partly due to environmental factors. But everyone still loves Algonquin Park, and it appeared that every one in the audience had visited there. 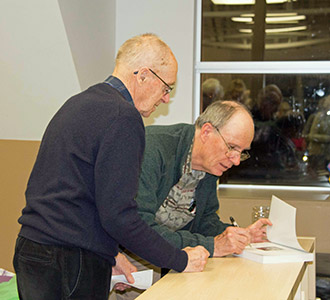 Ron signs a book that Alex Sinclair has brought.