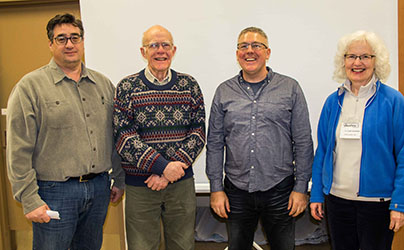 The largest island – Beausoleil– is the only one with human habitation. All the islands are accessible only by boat – which makes them relatively undisturbed, even though they are quite close to large populations of people (1.5 hours from Toronto). This relative isolation helps maintain the habitat for bird migration and nesting. Beausoleil Island is at the southern end of the islands along the Georgian Bay coastline,and is the meeting place of (on the northern side) mainly exposed granite bedrock (the Canadian Shield) and to the south, sandy soil over sedimentary rock.

Ethan opened with a spectacular aerial video shot by drone showing the obvious demarcationof the two soil types in autumn– on the south, colourful deciduous forests; to the north, mainly coniferous forests. This juxtaposition of underlying soil forms the basis for the marked biodiversity observed in the park.Artists have long been attracted to the shield type landscape – striated folds in granite, rocky outcrops, windswept white pines.

The Group of 7 almost certainly took inspiration from this area. Photographers are drawn to the stark rock, and diverse vegetation– lichens, mosses, orchids and other plants.  Kayak and canoe access to the coastal wetlands eco-system allows the photographer and nature lover to approach ideal habitats. Perhaps because of the remoteness of the islands and their size (small), the large mammal population such as moose, and bear, is scarce to non-existent.

Again possibly attributed to the remoteness of the islands, the reported bird species are only 189 (probably more there, but not documented by birders). However, there is a high breeding diversity – osprey, bald eagles, warblers including parula, Canada, prairie warblers and yellow-throated vireos. Ethan suggested that the best birding time was in the fall to avoid the spring bugs.

Once home to aboriginal groups, the Beausoleil now hosts 2 YMCA camps and the park’s buildings, as well as the park’s campsites. Access is through 2 small passenger boats with scheduled crossings,  and if one is day-tripping, the time available on Beausoleil is 4 hours. However, one can camp overnight or longer, in tent sites, or in prospector tents, or tentex (Aframe/tent), or in one of 10 cabins. Information is available from the Parks Canada website.

Howard Black, of the Orillia Naturalists’ Club, thanked Ethan for his informative and beautifully illustrated talk. The club plans an outing to Beausoleil Island in June.