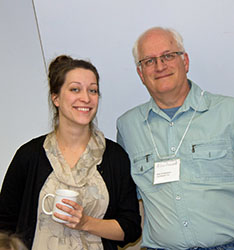 We welcomed Tricia Stinnissen, who is a Resource Management Officer at Bruce Peninsula National Park and Fathom Five National Marine Park, as guest speaker at its March 22 meeting. (She is pictured above with her proud father.) Tricia grew up in Orillia and began working in the conservation field in 2009, where she got her start as a conservation assistant for the local Couchiching Conservancy.

In 2015, she began her work at Bruce Peninsula/Fathom Five as a Resource Management Officer. Bruce Peninsula and Fathom Five are two parks located on the tip of the Bruce Peninsula adjacent to the town of Tobermory. They are small parks but both are home to many unique, rare, and Great Lakes endemic species such as the Massasauga Rattlesnake and Lakeside Daisy.

The national parks have stunning landscapes and draw a lot of tourist attraction, yet there is a balance that needs to be kept between tourism and maintaining ecological integrity. Across the nation, Parks Canada has created the Ecological Integrity Monitoring Program, which monitors the state of the park’s ecosystems. The Bruce Peninsula National Park has 3 main indicators to monitor ecological integrity-Forest, Shrublands (alvars) and Freshwater Indicators, each of which has a variety of unique assessments.

Fathom Five National Marine Park has specific marine environment measurements. These measures allow Parks Canada interpret how close the ecosystem is to its natural state and gauge their condition and trend throughout the years. One of the new measures for alvars is gastropods- snails and slugs. Previous studies have indicated that on the Bruce Peninsula, habitats such as alvars and cliffsare very important to gastropods and could be a potential diversity hotspot for land snails. Transects were setup and then staff would carefully sift through rocks and moss to find these tiny species of snails which would be sent away for identification.

One of Tricia’s new initiatives for 2016 for Species at Risk was the monitoring of bats. By using bat acoustics, it is possible to locate new and confirm old winter hibernation sites. Roost loggers have been placed in a few caves that could be potential hibernacula this winter to determine if these caves are being used as winter refuge, what species are there, and could reveal early detection of White Nose Syndrome.Different species will be identified based on the echolocation sonogram, which looks at the frequency and shape of the call.

Tricia also updated the club on the result of her thesis since her last presentation in 2013. Over the summers of 2012 and 2013 she cycled 40 km/ day and found 2541 road events of all amphibian and reptile species,  89% of which were found Dead on Road. Among these observations were Massasauga Rattlesnakes, a threatened species where road mortality is one of the main threats to the persistence of this species.

Other snake species suffered, with almost 1 snake found per km per day. Using the collected data to determine high density mortality areas, Parks Canada has installed 3 eco-passages in 2016 and will install 3 more this year. The park will test success of these mitigations by replicating the thesis methods. Each eco-passage will be monitored by trail cameras and will be paired with exclusion fencing to encourage the use of the eco-passages and artificial turtle nesting mounds on each side of the road.

A citizen science program will be implemented to monitor the success of the turtle nesting mounds Tricia is very excited all her thesis work will be ongoing and may be evolving into tangible benefit to all species that use our roadways.