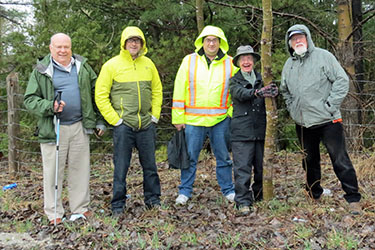 The 6 stalwarts – photo by Heather Ewing

Well  folks, these walks are called “ Signs of Spring”, and rain is definitely one of those signs. Mother Nature has been quite kind to us  …….but sometimes  we push the limits too far and get wet. That’s the reason good rain gear was invented.

Along the roadsides and trails we now see great patches of Horsetail ( SNAKE GRASS , OR PUZZLE GRASS). Horsetail is a living fossil. It is the only living genus of the entire class Equisetopsida,which for one hundred million years was much more diverse and dominated  the under story of the late Paleozoic forests with trees reaching 30  meters in height. It is one of the oldest plants on the planet. Fascinating history!

Also in the same areas we see clumps of small yellow flowers ( on leafless stems)  that resemble dandelions.These are called Coltsfoot . When the flowers die and set seed  the leaves appear in early summer.The leaf resembles a colt’s foot. Hence the name.

When the sky is so  dark all the birds appear as interesting silhouettes.A  Robin looked very strange….. a casualty  of injury, storm , or who knows  what misfortune.The head was definitely Robin… ??????The woods was alive with mysterious creatures but most remained just that.However we were treated to the beautiful song of the Winter Wren…and the White-throated sparrow singing the loyal “ Oh Canada , Canada , Canada “ call.