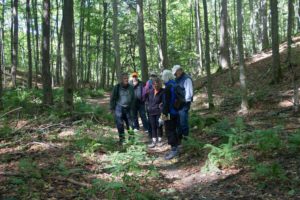 Sunday, October 1, was a perfect day for a fall walk with Margaret and David Kennedy
in the hills and valleys of the Copeland Forest.
Twenty naturalists, including two visitors from Holland, Stinnissen family members,
and an expert specializing in forest meditation observed the forest ecology as it prepares for winter.

To start, a short detour took us to see a classic swath of New York ferns in pristine condition.
We then walked up a valley whose steep sides offered an easy overview of what grows
in an upland forest.

Many of the plants being in their final lifecycle presented different signs by which
to identify them:  Wild leeks with no leaves remaining had only an erect stalk with tiny,
hard, black seeds clustered in an umbel; blue berries hung from both the leafless stems
of the Blue Cohosh and the arching stem of the Smooth Solomon Seal;
red berries drooped in an end cluster from the False Solomon Seal;
White Baneberry displayed only its ‘white doll’s eyes’ while the Red Baneberry,
fewer in number, showed their brilliant magenta, yet poisonous fruit at the end of an erect stalk.
And if one wasn’t careful, one could miss the parasitic Beechdrops.
They had lost their minute buff flowers and now looked like 5-inch twigs sticking up from the brown,
leaf-covered forest floor.

Thanks to the abundance of moisture this summer, many plants that would be withered
and brown in early October, were still lush.  As we descended from the hilltops
on single- track trails, surrounded by cathedral-sized Maple and Beech trees,
at the bottom we encountered Sensitive ferns still bright lime green and their fertile
fronds still green, not black; Bracken and Maidenhair ferns were in excellent form too.

Many more plants and shrubs were noted, but as usual we shall mention
just the more showy and unusual ones here.

Just as dessert is the reward at end of a good meal, so the mycologists
were to us at the end of our trek. Barb and Warren Ryckman,
Heather Ewing, and Nancy Ironside, who had gathered mushrooms along the way,
spread the findings on a table where they identified them and gave us
the basics of mushroom classification.

We left, filled with the joy only nature and the company of fellow nature lovers can provide.
However, did we hear musings of what the contours of this Oro Morraine
would look like covered in snow?

There were many healthy Beech trees, assoc with the many beech drops -an obligate parasite  of the tree.
The Ash-tree Bolete ( mushroom) was also collected. It forms sclerotia (looks like seeds underground), which shelter aphids.
It is the aphid that is parasitic on the tree, and also forms carbohydrates for the fungus.

Both the Ash and the Beech are threatened by diseases, – the Emerald Ash Borer and the Beech Bark disease.
If we loose these 2 trees , we would actually loose 5 species.