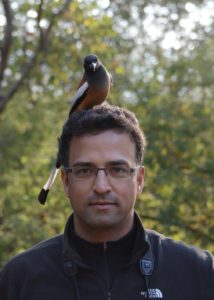 Justin Peter, a Quest Nature Tours leader, and former Senior Naturalist to many organizations, presented
a mosaic picture of nature in India, as seen on his travels.
He is uniquely placed to review this subject as he has made many trips to the birth
continent of his mother.
The first surprising feature of India is its varied habitat – which of course influences the ecosystems present there.
The second overriding factor is the density of population – notably in the cities, where “nothing goes to waste”.

Justin’s mother’s home area is the North West of India – which is the most arid part of the country.
It includes New Dehli, the most visited city of India.

Out of the city, you may see vast expanses of no “development”, but the land is farmed intensively,
and is very productive. During the dry season, the native vegetation may look dead (October to June),
but when the monsoons come, they provide rain water to the reservoirs which last,
generally, through the dry periods, to irrigate the farm crops.

The cattle of India are of two lines – one descended from camels with a hump on the back
which stores water and fat. The females are tethered, but when they stop producing milk, they are released
– so you may see free cows wandering the streets/countryside (males are also free roaming).
Eventually they are impregnated again, then produce milk again, and so are farmed again
Domestic water buffalos are the second line – with shorter curled horns than their wild relatives
– these are useful in the rice paddies – and they are never free roaming.
All these cattle, free-roaming and not, produce millions of tons of scat – collected by hand,
mixed with charcoal, dried and sold for fuel. One might see a storage shed full of these
paddies strung together, waiting to be sold – or they might constitute a wall of a shelter.

There is always something to see from a naturalist’s’ point of view.
There are hundreds of species of birds, such as the rose ringed parakeet, dozens of raptors,
the five striped palm squirrel (like our chipmunk), and of course the blue peacock, with their beautiful trailing coverts .

Further west to the border with Pakistan, things are even more arid.
Vegetation includes desert melons (a source of water), euphorbia, and tumbleweed.
The dry desert is an important resource for the Great India Bustard, which is protected, but nonetheless hunted.
This habitat is endangered by intense grazing, and by invasion by cotton.

At the border with Pakistan is the Rann of Kutch, the only large flooded grasslands zone
in the whole Indo-Malayan region.
It is flooded by seawater forced upriver in the monsoons, so is marsh in the wet season,
but “islands” of vegetation in the dry. It is home to unique flora and fauna – and of note, flamingo, pelicans and shorebirds.
It is important for migration and breeding.
Justin told the story of how 40 years ago, a man started feeding pigeons in a town in Rajasthan,
and the Desmoiselle Cranes (which wintered in the area) started eating the leftovers.
This increased the numbers of cranes, and now Rajasthan is a tourist attraction.

Asiatic lions have had vastly fluctuating populations – from 20, 20 years ago, to 300 now.
While they prey on cattle, they also prey on deer (chital), which have been competing for food with the cattle.
The lions require forested habitat – and are limited by space (forest occupies 9% of the Rajasthan).
Big cats thrive in Rajasthan, including the tigers, some estimated 2,000 of them, very difficult to see,
capable of roaming 100’s of kms. With the huge variation of topography within Rajasthan,
and the effects of the weather, there is a large variety of flora and fauna.

Just as the sub-continent is huge, so is the topic of nature in India.
Justin left us with a thirst for more knowledge, and an awareness of the vastness of the topic.
There were many more interesting stories and it was a beautifully illustrated presentation.