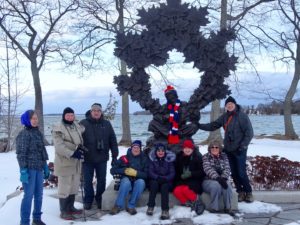 The round frowning Robin standing on stiff legs on the icy snow, and the shivering Great Blue Heron trying to pull its body inside its fluffy feathers, were begging Mother Nature to please turn up the thermostat.
In spite of this the Chorus Frogs are struggling to keep singing even as the pond keeps freezing over.

The now open waters had a few Common Goldeneye and Common Mergansers. The Mallards preferred to stay in the little ponds in the park and the Canada Geese needed the open grassy areas where food could be found.
The Cardinal , Red-winged Blackbirds, Grackles, Starlings and a lone Turkey Vulture appeared to let us know that there were birds around.

A strange sight…….. On the pavement a Garter snake had been curled up and been run over by a car. We wondered where it had come from since the snow , and banks were as hard as cement. Where had it come from to that place???