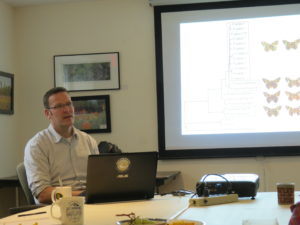 How are things related to each other?
Most of us have come to think of DNA as the final answer, but Troy stressed that many DNA analyses are just one   tool for classification and  identification and should be added to location, morphology and other types of observations.
The double helix is the description of the structure of a DNA molecule.
In “Phylogentics 101”, he explained that in the double helix there are two strands, and 4 types of nucleotides have been named: ACTG, coded by different colours, and held together by hydrogen bonds. T and G always bind together, as do A and C. There are also many areas in the double helix, which are considered junk DNA at this time.
This is basic, and taught in high schools.

Both nuclear and mitochondrial DNA are used in classification and identification.

Epigenetics? It seems that environmental changes can change DNA, but Troy said this is still under study.

A chromosome has 23 pairs; ½ of each comes from one parent and ½ from the other, except for one.

Since Troy often works with Phylogenetics  he explained to us how DNA is obtained.
There are many steps to extract enough material to fill a vial. Ninety-five vials of specimens are processed at a time.
The Museum of Nature works closely with The University of Guelph, The Canadian Centre for DNA Barcoding. It works with only a small part of the organism. The area of study is extracted from the mix by specific reagents.
There is a global DNA barcode library database ( GenBank), and searching for matches takes more computer bites than most of us can even conceive. Matching the total genome is even more overwhelming.

A group in Colorado and at the New York Botanical Garden have been generating whole genome sequences for almost 1000 species of lichens from the southern Appalachians.
DNA degrades over time and may only last 5 years (especially in fungi). There are now facilities that
store extracted DNA at –80 degrees C, to prevent the degradation..

He moved on.
Cladograms and phylogenetic trees are used to illustrate relationships among organisms

A Cladogram was used in the past, but the Phylogenetic Tree is more current. A Cladogram is based on observable traits ,whereas the Phylogenetic Tree is on a time scale. It looks at the molecular side, and different groupings of species, which are called Clades.
Monophylectic is usually a species concept, where the species come from a common ancestor.
Paraphyletic is a concept of ancestry, and may include shared ancestors, and may include convergent evolution.
What is a species? This is subjective and somewhat blurry. How much genetic difference is needed to make a species?
A very interactive group of 11 people interrupted, questioned and discussed, so that the meeting, starting at 10, extended until 12:30. What will be said 10 years from now?