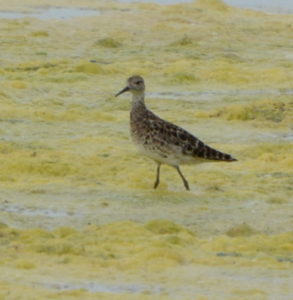 Seven members of the Orillia Naturalists’ joined Geoff Carpenter on June 9th as we
visited the Nonquon lagoons in Port Perry. These lagoons are no longer used for sewage, but are kept as a bird sanctuary. All of us had obtained their mandatory access permits before we headed out on our adventure.
Geoff Carpenter was a terrific leader, and it was a pleasure to be with someone with his long experience and hearing skills. He works with Avocet Nature Services (Specializing in Environmental & Natural History Surveys and Group & Personalized Guiding Services) We thank Geoff Carpenter for the photo of the Reeve.
Although the weather was quite warm, the sun and light breeze felt great.
We immediately were treated to good looks at several Black Terns as they hawked over the lagoons picking off bluets and midges.
Our primary goal had been to see shorebirds, but high waters put a stop to that.
Or did it? Geoff quickly spotted a large shorebird in the south cell of the lagoons and identified it as
an adult Reeve (Ruff). This rare visitor from European and Asia is seldom seen here.
After comparing photos later, Geoff determined this was the same female that stayed for a few hours at Cranberry Marsh in Whitby two days earlier.
After we had our fill of this great find, we also saw a locally uncommon Ruddy
Duck and a summering Red-necked Grebe in one lagoon. A female Hooded
Merganser, a Wood Duck with about 15 babies, two Ospreys tending their
nestlings, and catching fish, two male Shovelers, two Trumpeter Swans with their 5 cygnets,
Gadwall and much more entertained our little group.
Myriad, butterflies, dragonflies and both Green Frogs and Bullfrogs added to our species list. 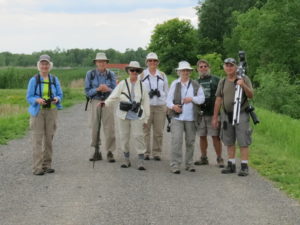 Thanks to Heather Ewing for the group photo, and Barb Ryckman for organizing this trip
( which was not easy, but would go well another time)

We had 41 species of birds: