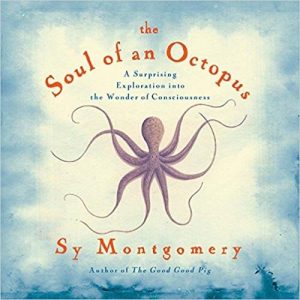 Heather Ewing, The membership Chair of ONC presented this book:

Have you ever wondered if you were smarter than an octopus? Or, have you wondered how these animals interact with their environment, make decisions, solve puzzles, or just live their lives?
Sy Montgomery spent time learning about these mysterious creatures by going behind the scenes of Boston’s New England Aquarium, interacting with both octopuses and their human keepers. In the book she tells of her time spent when she fell in love with 4 different octopuses, each with their own personalities and behaviours. They were playful and affectionate, feisty and shy. While she was observing and learning about their physiology and their behaviors, they were equally observing and learn independently, to ‘taste’ more than one individual at the same time while also trying to steal fish from the keeper’s container…the ultimate multitaskers!
Montgomery illuminated that octopuses are incredible animals. They are shape-shifting, color-changing, problem-solving animals of preternatural skill. Octopuses routinely solve “locked-box” puzzles in order to get at the treats inside, crabs being a particular favorite. They are also expert ‘escape artists’ and so test the aquarium staff who must figure out how to keep their charges safe. One aquarium in Santa Monica had it offices flooded, incurring thousands of dollars in damages when an eight-inch-long two-spot octopus began experimenting with a valve in its tank!
Montgomery was so intrigued by these complex animals that she learned how to scuba dive in order to observe octopuses in their natural environment. I enjoyed reading about her experiences with her aquatic and human friends, and, as a former diver, had a few chuckles as she described her diving experiences, especially her struggles with donning her wetsuit.
Octopuses even have their own fan club, Octonation declaring itself to be the largest one in the world.

Sy Montgomery is a naturalist, documentary scriptwriter, and author of twenty acclaimed books of nonfiction for adults and children, including the memoir The Good Pig, which was a national bestseller.

I borrowed this e book through Overdrive from the public library. Soul of an Octopus, copyright 2015, is also available on Amazon in new and used print and virtual copies