BACKWOODS OF CANADA – by Catharine Parr Traill.
(A book review)

I read with delight your letters home describing your first two-and-a-half years in “the bush” of Upper Canada.
I found the account of the trip in 1832, including your bout of cholera at Montreal, and especially the painful “road” trip to your final homestead lot on the lake north of Peterborough, revealing. It convinced me that the romantic notions I harboured about the life of a pioneer in the 1830’s of Upper Canada were misplaced.
The ensuing letters spoke of your struggles to settle the lot, what had to be done to turn the dense forest on the edge of a lake into a cozy home and productive farm. I am constantly amazed that you had the time and energy to write anything, let alone the missives that appear in the book. The forest clearing efforts, alone – being multi-year, requiring “choppers”, then “logging” bees, then leaving the stumps for years, – were staggering – but I’m still not sure how you “farmed” around the stumps. Your home was also built in stages, and every feature had a purpose – very much function over form. Imagine picking hops from your stoup to raise bread – after learning how to treat the hops to produce “barm”. How you gained all your lore for producing the necessaries of food I can’t imagine either, given how remote from society you were in the bush. I rather think that S________ must have been Samuel, your brother (my grandfather), and he and Mary his first wife must have filled in much of the knowledge.
Your description of the life of the indigenous peoples around you casts a light on the evolution of that culture – and on the relationship between the newcomers and the natives.
I think I know where I get my enjoyment of nature now that I have read your descriptions of everything natural around you, and how when under stress, you would turn attention to something interesting or beautiful in nature to help you cope.
It’s fun to speculate as to what some of the plants you describe might be (not always named by anything we would recognize today) – and I wonder what the little grey and white woodpecker you mention is.
You describe the contrast between the life you left behind in England, and the life you assumed in the bush. You say that despite the deprivation, you have come to “love Canada”. You have the qualities of the successful settler that you describe so well.
It has been a pleasure getting to know something of you these 2 centuries later. 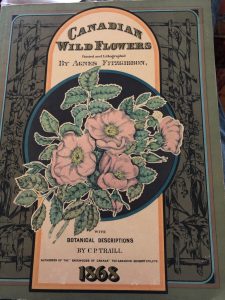